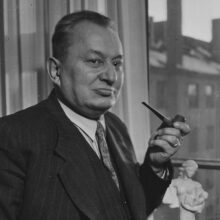 Born in Helsinki in 1893 and died in the same city in 1958: he was thus 30 years younger than his compatriot Sibelius, but died just a year after him. He studied music in Leipzig and Moscow, where his primary influence in matters harmonic and orchestration was Alexander Scriabin. As The New Grove puts it, "His mature style may be seen as a fusion of chromatic polyphony, Russian 'mystical' colour and Finnish folkdance rhythms; he was one of the pioneers of highly chromatic, and highly coloured, writing in Finland, and for years, even decades, his endeavours were not understood." In search of some sort of understanding, perhaps, he retreated from his complex mature style to a more crowd-pleasing national romantic style after about the mid-1930s.