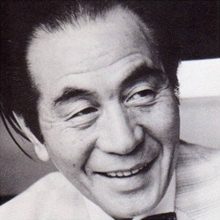 Ifukube is probably most famous as the man who wrote the scores for films like 'Godzilla', but he had an extensive non-film music career, too, initially writing a succession of ballets before turning his attention to more purely orchestral music in the 1950s. His style has been called 'ethnic exoticism': it usually sounds distinctly Oriental, with its use of pentatonic and other non-Western scales, but then adds a lot of striking percussive effects for that added touch of savagery and barbarousness!