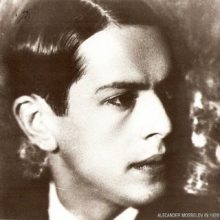 in Moscow, 1973. He had a reasonably privileged background (his mother sang in the Bolshoi Theatre; his step-father was a painter: he was therefore exposed from an early age to artists and their cosmopolitan lifestyle). Nevertheless, he fought bravely for the Red Army during the post-revolution civil war. Only at 21 did he begin formal music education and composition. Initially, he made his name as a pianist; but from aged 27 onwards, he concentrated on composition.

Unfortunately, just as Soviet Realism became the Authorised Gospel of the day, Mosolov discovered folk tunes amongst the Turkmen, Tajik and Kyrgyz peoples, setting them in polytonal 'barbarist' style. This put him at odds with the musical establishment, and in 1936 he was expelled from the Composers' Union (allegedly for treating waiters poorly!). Worse followed when, in 1938, he was tried and convicted of counter-revolutionary activities and sentenced to eight years in the Gulag. He ended up serving only eight months, but was thereafter exiled from being able to live in Moscow or other large cities.

The experience altered his musical outlook: he became a lot more Soviet Realist! He conformed, basically, and his music perhaps became less interesting in consequence. Whereas his earliest work contained extreme dissonance, his work from after his release is distinctly less 'challenging'.

A good example of his early 'barbarist' music is the piece for which he's probably most famous: the Iron Foundry, which is the final part of a ballet suite called 'Steel':

Compare that to a part of the final movement of his Harp Concerto from the 1939, after his release from the Gulag:

It's certainly still attractive, but it's quite conventional, clearly tonal, and nowhere near as inventive as the earlier piece, I think.

Cataloguing him is the usual Cyrillic-to-English transliteration nightmare. The general rules of this website are: follow New Grove where possible, but ignore extra apostrophes they might introduce to indicate stress. Thus his name in my edition of the New Grove is given as Alexandr Vasilyevich Mosolov. Unfortunately, that can't be allowed to stand, as-is, because 'Alexandr' is a silly transliteration of a name that elsewhere the same dictionary transliterates as 'Alexander' (see their entry for Borodin, for example). Also, the surname has been rendered by some as 'Mossolov', with a double-s. See, for example, Last.fm. Wikipedia and New Grove both run with the single-s version, however, so I'm inclined to follow their lead in this respect. As ever, most websites that bother to mention him at all tend to omit his Patronymic (or middle) name. The New Grove does not indicate it is in any way optional, however, so this site will use it.

Putting all those things together, therefore, we catalogue this composer's work under the full name: Alexander Vasilyevich Mosolov.