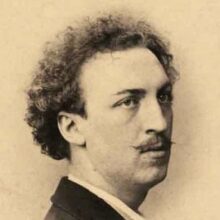 Asger Hamerik was Danish, being born near Copenhagen in 1843 and dying in the same town, some eighty years later, in 1923. He had practically gone into retirement for the last twenty years of his life, however, with his last major composition being the Choral Symphony of 1898. He has six symphonies to his name, and five 'Nordische Suiten, based on Scandinavian folk song melodies.

He is regarded as having been an important transitional composer between the likes of Niels Gade and Carl Nielsen.