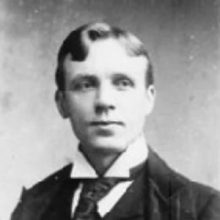 Frederic Cliffe is one of that clutch of people who, at the end of the 19th Century, helped usher in the 'English Musical Renaissance' of the early 20th Century, without themselves taking part in it. In his day, he was a famed symphonist and composer of a violin concerto, but he gave up composing about 30 years before he died, concentrating instead to teaching music to the next generation. He accordingly died in obscurity.

His dates are 1857 to 1931, being born in Bradford and dying in London. He was playing piano at 6, was a church organist by 11, and became a member of the piano teaching staff at the Royal Academy of Music in 1883, aged just 26. His pupils included John Ireland (who went on to torment the young Benjamin Britten!) and Arthur Benjamin. He continued to tour as a concert pianist. His first symphony premiered at the Crystal Palace in 1889; his second premiered at the Leeds Festival of 1892.

Of the first performance of his first symphony, the Daily Telegraph's music critic wrote, "It may be doubted whether musical history can show on any of its pages the record of such an Opus 1. The symphony is a masterpiece, and the composer, one might think, feels terrified at his own success. Mr Cliffe has by one effort passed from obscurity to fame, and must be regarded as a bright and shining star on the horizon of our English art." So: not too shabby, then!

He basically stopped composing in around 1905/10: it has been said that he "simply lost the compulsion to compose having grown too comfortable in his life". A colleague of his at the RAM (Algernon Ashton) wrote in the 1930s, at the news of his death, "Considering how brilliantly he began his career as a composer it is strange indeed that after his splendid initial success he completely ceased to write any more music, and so sank more or less into oblivion. Possibly, like many another right-minded musician, he became disgusted with the atrocities perpetrated by certain present-day so-called composers, and thus thought he could not keep up with their times!". Put another way, his music is conventional and he couldn't find the inspiration needed to respond to the revolutionary ideas coming out of the Continent (and more especially, of Vienna) at that time.