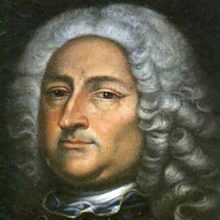 All three names are mandated by the New Groves. He was born in Padua around 1697 (my New Groves lists him as "c1700") and died in Bavaria in 1763. Those dates mean he was an approximate contemporary of Bach (younger by about 15 years). He moved to Würzburg in Bavaria in 1622 and there served more or less continuously in the court of the Prince-bishops of Bamberg and Würzburg until his death.

Of his music, the New Groves reports '[his sonatas from 1743] have rightly been related to the early sonatas of C. P. E. Bach, [though] nowhere in Bach's sonatas can so many dull sequences be found'! So not exactly a ringing endorsement of his musical abilities, then!! The entry for him goes on, nevertheless, to speak warmly of his music's 'rhythmic vitality', 'surprisingly extended melodic ideas', '[the] well-organised use of syncopation' and its 'sensitive, florid and wide-ranging lines'.

He has his moments, in other words 🙂