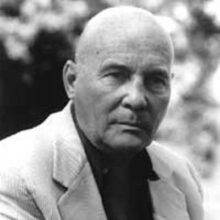 Hans Werner Henze was born in Gütersloh, Westphalia (near Bielefeld or Dortmund) in 1926 and died in Dresden in 2012, aged 86.

He is generally associated with the post-war avant garde -that is, his music is generally thought to be difficult to listen to, in all its plinky-plonk awfulness. That doesn't do him justice, however: he certainly was inspired by serialism and atonality, but he was also influenced by Stravinsky, Jazz and Arabic music, amongst other things. As the New Groves puts it, "Combining a free application of Schoenbergian principles with metrical and sound patterns ultimately traceable to Stravinsky, Henze's music achieved a fruitful, apparently effortless and very personal synthesis of two modes of thought considered at the time to be totally incompatible...". His music nevertheless (to these eats, at least) is not easy to get comfortable with, though his symphonies certainly offer hours of intriguing (and pleasant, if challenging) listening.