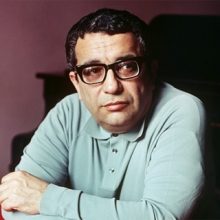 Born in 1918 and dying in 1982, this Azerbaijani composer is really best thought of as a 'Soviet composer' (just as his equally non-Russian colleague Khachaturian is), as that is the cultural and political context in which he worked his entire professional composing career. I guess it is inevitable, being non-European and even non-Russian that his name can be (and has been!) spelled fifty seven different ways before breakfast! His wikipedia entry lists him as 'Gara Garayev', for example, before going on to suggest Qara Qarayev  or even Gara Abulfaz oghlu Garayev. He is also listed -completely separately!- under all of his various K, G and Q spellings, in multiple variations, at Last.fm (which is hardly surprising, given the liberties that site usually takes with minor matters such as accuracy or facts). Frankly, it's a bit of a mess, but needn't be: my trusty New Groves, published before the guy had died, lists him as Karayev, Kara (Abdl'faz-ogli), and the brackets around his second name indicate that bit is optional... leaving Kara Karayev as the only authorised spelling that's accurate, Wikipedia notwithstanding.

Probably the most famous of his works is the ballet Sem' krasavits (Seven Beauties), written in the early 1950s and, for Western CD purchasers at least, the orchestral suite derived from it. The music is lush, expressive and romantic, though its free adaptation of national dances indicate a fondness for and appreciation of folkloric music.