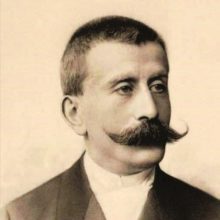 Despite the name, Moszkowski is generally considered a German composer, having been born in Breslau, Prussia (which is now part of Poland and goes by the name of Wrocław) in 1854. He has Polish origins, though: his parents were Polish Jews. He was noted in early life as a great pianist; he toured extensively throughout Europe as such. He gradually acquired a reputation as a good composer too, however -though New Groves dismisses most of his large-scale orchestral music as 'competently turned out but [lacking in] originality or vitality'. He invested unwisely and lost all of his wealth when the First World War broke out; he died in poverty, in Paris, in 1925.

He has one of the more spectacular mustaches I've ever seen photographed in the wild: I should think even Elgar would have been jealous!