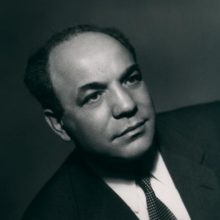 Born in New York in 1906 and died in San Diego in 1985, Paul Creston was the son of Sicilian immigrants and originally named 'Giuseppe Guttoveggio'... but no-one uses that birth-name when talking about him now. You might think that with a simple two-component, English name there wouldn't be much to get wrong about naming him correctly, but Last.fm (as ever) would like to disagree with that proposition, with around 30 different ways of cataloguing him (29 of which are, of course, completely erroneous)!

Describing his work (whilst he was still alive), my edition of New Groves says, 'Creston has made rhythm the keystone of his style, his technique depending primarily on constantly shifting subdivisions of a regular metre', which perhaps makes him grandfather to the minimalists of the 1970s and beyond. Groves also describes his music as 'lush impressionistic harmony and very full orchestration... brash and vital'.