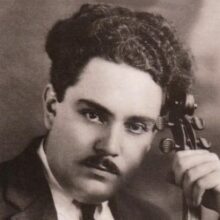 Born in Durango (one of the states of Mexico) in 1899, Silvestre Revueltas died in Mexico City in 1940. His early death was the result of alcoholism. He played violin in various orchestras (including in Texas and Alabama) during the 1920s. He became assistant conductor of the Mexico Symphony Orchestra in 1929, retaining the post until 1935.

New Groves says of his music that, "Without quoting Mexican folksong, his mature works weave melodies of folk type into a gaudy instrumental fabric". Continuing the damning with faint praise routine, it goes on to say, "His brother, the muralist Fermin Revualtas, closely resembled him in painting bold, simplistic designs limned in bright colours".

Bright, gaudy, simplistic... you get the message!