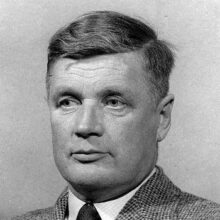 This Finnish composer was born in 1900 and died in 1961; his full name is given in New Groves as "Klami, Uuno (Kalervo)", but as the brackets around the middle name generally indicate optionality or mere lack of use, it's dropped in these pages. He is generally regarded as the most significant Finnish composer of the post-Sibelius generation (though his fame tends not to extend much beyond Nordic circles).

He eschewed the romantic nationalism then prevalent in Finnish music (think: Finlandia and the like!) and instead inclined to the French school, with its impressionism, and in particular an enthusiasm for Ravel. He had, apparently, an excellent orchestral technique.

He wrote two symphonies proper, along with a "Symphonie enfantine"; two piano concertos and a highly-regarded violin concerto. Much of his orchestral music (and ballet scores) are associated with the Kalevala -a 19th Century epic poem about Finnish legends of the creation of Earth.