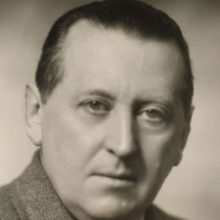 Born 1884 and died 1961 (which makes him an almost-exact contemporary of Percy Grainger), York Bowen was christened 'Edwin York Bowen' and his wiki page records him as such. Last.fm is as confused as ever, offering at least a dozen variations on his name(s). The New Groves is clear, however: it lists him as Bowen, (Edwin) York, with the brackets around the first name indicating that it's optional or seldom used.

As the only composer I have whose 'first' name begins with a 'Y', I'm more than usually keen to follow New Groves on the matter: just as it's Benjamin Britten and not Edward Benjamin Britten, so it's plain York Bowen in these pages!

With all that said, it's quite possible that you've never heard a note of his music. He was actually quite popular and acclaimed in the 1900-1910 period, with the likes of Camille Saint-Saëns declaring him Britain's finest young composer (this at the same time as Elgar was claiming all the plaudits from everyone else!) He was clearly talented -as a pianist, horn player and viola player as much as a composer- and admired in his day... but his day was short-lived. His highly romantic style was swiftly regarded as old-fashioned and anachronistic, especially after the First World War and the rise of the Second Viennese School. He therefore somewhat plunged into obscurity from that point on and his reputation has not really recovered. Many of his compositions remain unpublished.

There is apparently a York Bowen Society, but since its web site doesn't seem to run to https and appears not to have been updated since 2011, I suspect it may not be as active as it might be! The lack of a reply to an email I sent them at the start of August 2021 tends to suggest similarly: it is an ex-Society and has probably ceased to be!

Sadly, attractive as his music is, you only have to listen to a piece or two of his in conjunction with, say, a small piece of Holst or Vaughan Williams to hear that he is charming and 'nice', but not terribly imaginative, challenging or intellectually demanding. There's a reason for his descent into cultural oblivion, and it's just 'niceness'. If Holst, Bax or Vaughan Williams sound at times as if they are coming from Planet Weird, York sounds as if he is coming eternally from Planet Edwardian-Salon-with-Gas-Lights. If, again, you were to compare him with his close contemporary Percy Grainger... well, there's no comparison. Grainger sounds bonkers and York sounds like a séance with Dame Margaret Rutherford.