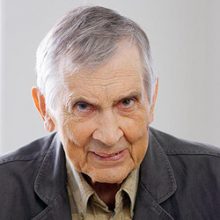 A Finnish composer, born in 1928 and dying as recently as 2016. He rates barely a column in my 1980s New Groves, which dismisses him in its final words as having '[been] accused of ecclecticism and lack of individual style, and the quality of his output is uneven. But at his best, he can write music that is interesting and distinctive'. That last sentence especially seems to me to be a classic case of 'damning with faint praise'!

I find most of his music gnarly and quite difficult, but he was an especially prominent dodecaphonist in the 1960s. He became decidedly more 'neo-romantic' in the 1970s and beyond, so if serialism is not your cup of tea, aim for the later works!