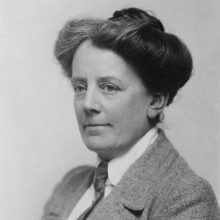 For once, we have no arguments about how to spell her name, but pronunciation needs to be sorted: it’s Sm-eye-th, not Sm-i-th. In other words, it’s a long eye sound, as in ‘bright’, not a short one, as in ‘tin’.

She was an extremely interesting character and produced some exceptionally good music that deserves more listening than I suspect it gets these days.

She was born in 1858 and died in 1944: so she had a good, long run at life, though sadly she basically gave up composing in the late 1910s -probably at least in part because, as a woman, she was pretty much snubbed by the male musical establishment of the time. She was writing before Elgar hit the big time and, to my ears, she sounds at least his equal… yet he took the plaudits and awards and she rather didn’t. Perhaps by way of a consolation prize, she was awarded her D.B.E. (making her a ‘Dame’, the female equivalent of ‘Sir’) somewhat late in the day, in 1922. By then, she was going deaf and would be profoundly so by the mid-1930s, when her music began a bit of a revival.