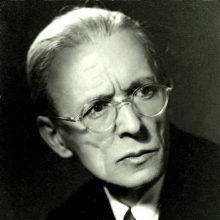 I don't have many avowed fascists in my music collection (hopefully, for obvious reasons!), but Pizzetti is one of them. Born in 1880 and dying in 1968, he was a colleague of people like Respighi, Malipiero and Casella (who were all born around the same time). Unlike them, however, he signed the Manifesto of the Fascist Intellectuals in 1925. The New Groves is mysteriously silent on this fact! Clearly, as a supporter of fascism, his music is always likely to be conservative in outlook, if not actually reactionary. To my ears, that tends to make it mostly tuneful and attractive, however! It is generally inventive and imaginitive, too.

His main area of interest was in opera (he wrote about 19 of them) and, secondarily, in choral writing, though he also penned a symphony, a couple of string quartets and several other orchestral and chamber works.