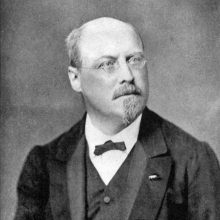 Joseph Joachim Raff was born in Lachen, near Zurich, Switzerland in 1822. He died aged only 60 in June 1882, in Frankfurt am Main, Germany. Curiously, the New Groves says of his death-date, and I quote, "? 24 or 25 June 1882": the vagueness appears to have arisen because he died on the night of the 24th, and no-one is apparently sure whether his last breath was taken before or after midnight!

The 'Joseph' first name is bracketed in New Groves, indicating its optionality: like Haydn before him and Britten after him, one or more saints' names were commonly given at baptism, only never to be used again!

He was born in Switzerland because his father had fled there, from Württemberg, to escape French conscription: a reminder that Europe at the time was in the thick of Bonaparte's shenanigans (though by 1822, Napoleon himself had been safely dead a whole year, of course). The refugee-like existence in Switzerland no doubt explains the family's poverty there -and hence Joaquin's lack of formal education.

He was, however, composing (and getting published) by 1844: Mendelssohn had recommended his works to the publishing house in Leipzig. Liszt gave a concert in Basle in 1845: he took the younger composer under his wing, took him to Germany and got him a job in a Cologne music shop. He then proceeded to move around Germany, taking one job after another. His composing career really took off in the 1870s, in Frankfurt, where he was appointed director of the Hoch Conservatory, a teaching position he held until his death.

He was well-known during his lifetime and considered, along with Wagner and Brahms, as one of the masters of modern music -though contemporaries were also not shy of pointing out the weaknesses in his compositions. New Groves declares him capable of "triviality and sometimes vulgarity": this is not surprising, perhaps, given he wrote huge amounts of music in  every conceivable form and genre. The listing of his works in the New Groves is about 2 pages long, which is lengthy by most standards. Sadly, perhaps, posterity has not treated his works kindly, on the whole; much of his output is now entirely forgotten. Recordings in recent years have helped restore his reputation to some extent, with his 11 symphonies being perhaps most well-known now.

Personally, I find his music attractive enough... but not terribly demanding or engaging -and therefore not particularly memorable, either.