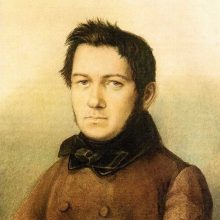 Glinka was born in 1804 and died in 1857, so he only lived for 53 years. His output is correspondingly modest in quantity -but was exceptionally influential on later Russian composers, to the extent that, later, the members of 'The Five' (Mily Balakirev, César Cui, Modest Mussorgsky, Nikolai Rimsky-Korsakov and Alexander Borodin) essentially considered him their cultural inspiration and father.

Glinka should be catalogued with all three names, as per New Grove. Last.fm, inevitably, get themselves into a complete mess on this one. Not only do they have “Glinka, Mikhail” (wrong word order, missing the patronymic); they also manage a “Michael Glinka” (completely the wrong first name!) and “Michail Glinka” (nice attempt at a first name, but spelled all wrong, and with no patronymic!). They do actually run to one correct version, except it’s in Cyrillic and thus “Михаил Иванович Глинка” cannot be accepted in the present context as an appropriate way to tag his music (unless you are Russian, in which case, go for it!) Wikipedia are not much better: their article is entitled “Mikhail Glinka”, before the first words of the actual text being “Mikhail Ivanovich Glinka”. If only they could be consistent about whether the patronymic name 'counts' or not! They do, after all, get it right in the text, if not in the article’s title.