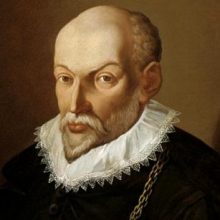 Oh God. A cataloguing nightmare, if ever there was one!

So, first let's mention that Orlande de Lassus is how he's catalogued in my New Groves (1980 edition, but he's also found under that name in my 1940 edition of the original Groves, too). It's also how you'll find him in Wikipedia, where they helpfully mention you might also catalogue him as Roland de Lassus, Orlando di Lasso, Orlandus Lassus, Orlande de Lattre or Roland de Lattre).

The problem in essence is that there's no right way to mention his name -and people of one generation will likely want to catalogue it differently from those that come after (or before!). More specifically, he was born in Mons, which is in modern-day Belgium, and thus could have a Frenchified-name; but at the age of twelve, he moved to Milan, where his name could be rendered in a more Italianate fashion. Thus "Orlande de" is clearly a nod to his French/Flemish origins; whilst "Orlando di" is more of an acknowledgement of his adopted Italian background. "Lassus" and "Lasso" suffer similarly from whichever geographical viewpoint you decide you want to look at him.

At this point, I'm simply throwing up my hands and declaring that 'Orlando di Lasso' is how I was introduced to his music during my time at Cambridge, and that's how I'm cataloguing him thereafter. The bottom line is that there's no 'entirely correct' way of doing it, and you pick what makes most sense to you. Orlando di Lasso is what I use in my music cataloguing through dint of long familiarity with it under that name. French, Italian or a zillion other variations are entirely understandable.