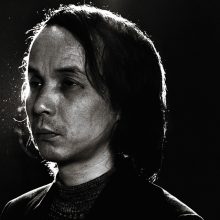 Whilst it's conceivable you might catalogue this composer as 武満 徹, on the grounds that that's presumably how he spelled his own name, English music collectors and listeners are permitted to forego the Japanese script and stick to an English transliteration. According to the New Groves, it's actually spelled Tōru Takemitsu, with a macron (straight-line superscript) over the first letter 'o'. Wiki agrees.

Far be it from me to dismiss either source, but it seems to me that since we're dealing with a transliteration, not the original, insisting on the macron is a bit silly. It's not standard English orthography, so any pronunciation hints it's trying to convey are going to be mostly lost on English speakers. You're not spelling his name 'authentically' anyway, so why insist on diacritic marks which aren't authentic either? Meanwhile, Last.fm is, as ever, in a world of its own as far as causing confusion on the matter: 50,000+ users appear to use the Japanese version of his name, but there are multiple alternatives, including a completely bonkers Tôru: whatever diacritic mark goes over that initial 'o', a circumflex accent isn't the right one!

On the other hand, his own music publisher has a web page dedicated to a singularly macron-less Takemitsu.

And then there's this LP, released in 1970 (that is, whilst he was very much alive and in robust good health): 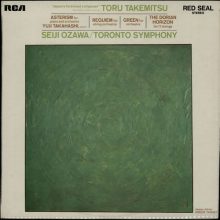 The reverse side of that macron-less cover shows Takemitsu closely involved with the making of the recording: 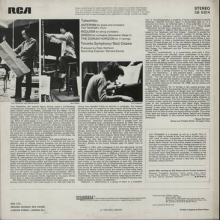 (He's the one in the first photograph, reading what appears to be the longest, tallest newspaper in the world -though it's actually a score of his!)

Short version: I catalogue him without the macron. It seems a silly addition to an English transliteration of his name that is already 'not original': adding extra layers of non-originality on top of inauthenticity seems pointless to me. His own music publishers (who should know) don't bother with it. The man himself, busy making records in the 1970s, saw fit not to insist on it. Therefore, it's expendable. But if you want to add it for your own cataloguing purposes, you can do so with a clear conscience, blessed as such usage is by the likes of New Groves.