It's a tiny thing in the scheme of things, I suppose: but KDE doesn't ship with any screensavers at all, and although one can always install the xscreensaver package, the enormous bundle of screensavers that come with that are all universally pretty rubbish. (Apologies to the developers concerned, who have undoubtedly written great software: it's just the screensavers themselves are all a bit dull!)

What I've wanted in KDE for donkey's years is an equivalent of the Really Slick Screensavers, which I used to run on Windows (when I used to run Windows!). In particular, the Helios screensaver that's included in that program is excellent and exactly what I would like to be able to run on Linux.

Well: it turns out that you have been able to do this since about 2002! I just didn't know 🙁  In fact, the original developer of them is really not keen on Windows and would rather that his work was not packaged to run on Windows at all. Basically, I've had it about 180° about-face all this time! Oh well: you live and learn

Anyway: here is a really quick-and-dirty recipe for getting Helios and its really slick companions running on Linux (specifically, in my case, on Manjaro running the KDE desktop).

Step 1: Make sure you have actually installed xscreensaver. In Manjaro, click Start -> Applications -> System -> Add/Remove Software. Click the search icon (a magnifying glass) in the top window bar at the left; type 'xscreen' in the search bar until you can see 'Screensaver' appear: In my screenshot, I have a red 'Remove' button next to the item in question because I've already installed it! But if it's blue and saying 'install' or 'build', click that option and then the 'Apply' button down the bottom of the screen.

Step 2: Using the same Add/Remove Software tool, now search for rss-glx, which is the port of the Really Slick Screensavers to Linux. Again, click the Build button next to that item, and 'Apply'.

Step 3: Now you need to integrate the RSS screensavers into the list of screensavers that Xscreensaver is aware of. Open a terminal and (as yourself, no root permissions required), cd /usr/bin. There, you should find a script called rss-glx_install.pl. Feel free to open it up in nano or another editor of your choice to see what it will do when run: it basically checks that Xscreensaver isn't running before it does anything, and then simply copies the RSS screensavers to your $HOME/.xscreensaver folder. It's not very difficult stuff, basically. So, to run it, just type:

...to kill off any xscreensaver program and processes that might be running. Then type:

...to run the integration script. And finally, type the command:

When first run, that should prompt you to start the Xscreensaver daemon (or background process):

Agree to launching it now by clicking [OK]. You should then be able to launch the Settings window. Scroll down the list of available screensavers and you should now be able to find 'Helios': The other settings (about how long to let the system idle before launching the screensaver and so on) are up to you. I personally only want to run this specific screensaver, so I make sure to select that option under 'Mode', and then things like the 'Cycle after...' setting become mostly irrelevant.

And that's pretty much it.

The only other possible issue to deal with is that the xscreensaver daemon may not auto-start automatically at every reboot, depending on your distro. For KDE on Manjaro, I just add it to the list of programs to autostart using KDE's own options.  Click Start -> Applications -> Settings -> System Settings, and then the Startup and Shutdown item, followed by the Autostart one in the left panel: 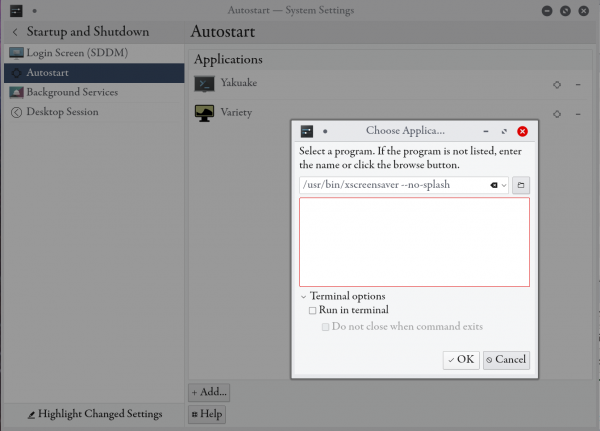 You need to click the [Add] button, and in the dialog box that then starts, type the command /usr/bin/xscreensaver --no-splash, as you can see me doing in the above screenshot. Click [OK], and 'xscreensaver' will be shown as having been added to the list of things to start up when you login after rebooting your PC: With that done, and your selection of the Helios screensaver having been configured previously, you're good to go: give your PC a reboot, and when it comes back up and you've logged in, the command

...should show a single line, indicating that the xscreensaver daemon is indeed running:

...and if it is, then you're all set. Just be patient and avoid touching your PC for the requisite, configured idle-time and you should see Helios appear in all its glory! On my 44" 4K monitor, it looks rather wonderful: (Bear in mind, those screenshots don't really do the thing justice... because, if you think about it... how do you screenshot a screensaver anyway? By random chance, as it happens... which means what you end up capturing might not be the best you could have captured if given a free hand!)