I'm a bit reluctant to discuss Windows Media Player (WMP) as a serious choice for a classical music player in 2019 for the simple reason that the last release of the software was Version 12, way back in 2009! Although it's still present and usable in various Windows 10 installations, the lack of new versions from Microsoft in the past ten years possibly indicates that they've lost interest in it as a project worthy of investment -making it akin to abandonware. If true, a player that has no future is not one I'd want to invest a lot of time and effort in getting familiar with, to be frank. (Incidentally, Microsoft's more modern music player is called Groove and is also built-in to Windows 10. I review that player here).

This review will, therefore, not be a long one: I just don't consider WMP to be a serious contender. But since it is still present in nearly every Windows installation on the planet, I'd better go through it to some extent, if only to draw your attention to its severe flaws!

Of course, you don't need to download or install anything to get it to run: it's a built-in Windows component, even on Windows 10. So just click Start, type 'Windows Media' and the option to launch the program should appear: just click it when it does.

At this point, you are immediately plunged into very murky waters indeed: By default, the 'Recommended settings' option is switched on. It is vital that you select, instead, the Custom settings. If you don't do this, the default options will result in various bits of information about your listening habits being sent to Microsoft -which is not something I particularly want to do! Click [Next] to confirm the new setting. You are then presented with this: These are the worst set of default settings I've seen for any of the music players I've reviewed. Fetch media information from the Internet is maybe something you could live with... but 'update my music files with that media information fetched from unknown Internet sources' is an abysmal option to see switched on by default! No Internet source of media information can get classical music correct, so to have your own carefully-curated set of metadata over-written by whatever the program happens to fetch... from ... er, somewhere... is an absolute no-no. I also think it's not necessarily a great idea for a program to keep a history of what things you've played, so those options all ticked 'on' at the bottom of that screen should be switched off too.

This is what you actually want to see on that screen: If you happen to click 'Finish' before successfully switching all those options off, I no of no simple way to switch them off afterwards. It's an appalling bit of software design, to be frank.

Once you click [Finish], you are taken to a blank player that has no obvious way of adding music to it, though it cheerfully tells you to do so: Being told to click 'Organize' when no such option is visible... not good. As you see in that screenshot, though, the secret is to click the Alt key, which reveals a standard(ish) File/View/Play/Tools menu. If you click File -> Manage libraries -> Music, you'll be taken to a dialog where you can specify the folder(s) where your music is stored. You can also achieve the same thing by right-clicking on the word 'Music' in the left-hand pane and selecting the Manage Music library menu option from the context menu that appears: Whichever way you do it, you'll be taken to this dialog box: 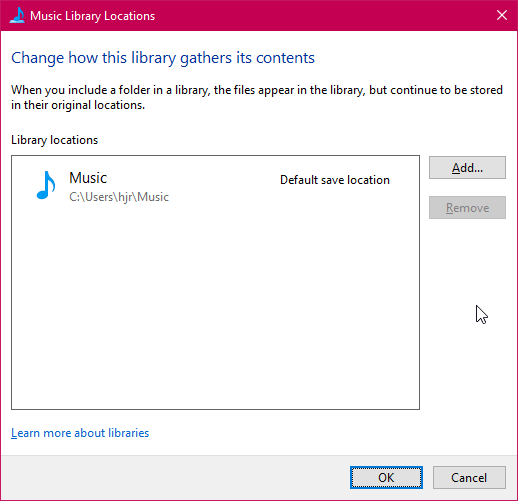 I find it unfortunate that it defaults to looking in your local C: drive's "Music" folder for music files, but it does. Most decently-large music collections are not going to be stored on a C: drive, I think. So you need to click [Add] and point it to where you actually store your music and then when the dialogue shows it will monitor both directories, you can click on the C:\...\Music one and the [Remove] button to leave only your actual music folders being monitored: When you click [OK] at this point, the program goes off to scan your music collection and gather its data. There is immediate feedback provided about this process: Notice how some of my 'A' music has already been fetched and displayed in the main panel. A blue 'Updating media library...' notice also appears in the lower right-hand part of the screen. So this is quite good: music is immediately playable whilst the program goes on collecting more music in the background: something more music players ought to be able to do, I think!

Unfortunately, that's about where the good news ends for Windows Media Player. A couple of things spoil the story from this point on! For starters, the overall appearance of the player reminds me of a spreadsheet! It displays album art, which is a good start -but the size of it is only configurable by making that first column of data (column A as we'd call it in Excel!) wider. There's a hard limit on how wide it can be, too. And, for good measure, the information it displays next to the album art is truncated in a non-fixable way: The "..." after the title, 'Appalachian Spring', tells me that something is there, but the program can't display it: which is particularly unfortunate as it happens to be the conductor's name, and I need that to tell one recording of Appalachian Spring apart from another. Not a good way to display metadata, basically.

The other thing that happened for me at this point is even worse than not being able to display collected data properly: The program is still collecting information about my music collection (see the notice down in the bottom right), and suddenly all the icons associated with music it has already collected have either disappeared or been replaced by a single piece of orange album art (which happens to belong to a piece by Dmitri Shostakovich, so I am assuming the program was busy scanning the Ds in my music folder at this point). If you stop and re-start the program, the display might come good: It has no problem displaying proper icons at this point, but my display pretty much varied according to the wind direction. Once the music collection process finished, I expect that this sort of visual 'stuttering' would cease to be a problem ...but that it happens at all is poor.

I'll mention two other issues arising at this point, both described in this screenshot: First: this screenshot was taken two days after I started the program collecting information about my music collection, over a gigabit network link and the program has managed to catalogue only down to some of the H's! That is incredibly slow: much slower than any other music player I've reviewed. That, plus the graphical 'stutters' as it goes about the collection process, suggests to me that WMP is simply not designed to work with large music collections.

Second: what's that icon labelled 'Unknown'? It's listing over 1200 'songs' (ugh!) as being by an unknown composer. Which is odd, because not one other music player in this comparative review found a single piece of music that had been improperly tagged. Let's just investigate that a little: So here's the media properties for one of the 'tracks' by an unknown artist, belonging to an unknown album. It's the Hymn of St. Columba by Britten. Here's that track's properties as exposed in Windows' file explorer: ...which seems to show the 'Contributing artists' and 'Album artist' metadata tags for that file are both just fine and readable! Scroll down in that properties box, too: ...even the Composer tag has been set correctly (and can be read just fine by the file explorer tool). So the Media Player's inability to correctly assign this track to the Benjamin Britten 'pile' is a bit of a mystery, but it again suggests to me that not having been updated in about 12 years is not good!

I'm not going to continue with this review: the player is 'built in' alright, but it's old, clunky, looks like a bad spreadsheet, performs abysmally during the music collection process and really has nothing to recommend it! For the record, WMP was able to do proper gapless playback. It is possibly it's only redeeming feature!

Overall Score: 1/10. It's dated and it shows. Its future is uncertain, but in the present, it cannot sort through a large music collection in anything approaching a reasonable amount of time or with the needed accuracy. It's default proposal to do metadata fetching from the Internet is a disaster waiting to happen. It's just not a viable contender for a serious music player in 2019 and beyond.