I find myself in a bit of a dilemma as far as running Giocoso on Windows 11, because I lack any hardware that is capable of running it in a supported fashion... yet, I do run it on a vintage 2012 spare laptop and Giocoso runs on it perfectly well. In fact, it is much easier to get it running on Windows 11 than it is on Windows 10, thanks to improvements in Microsoft's Windows Subsystem for Linux on that platform.

It remains, however, a problem to offer support for doing something on a platform that remains, for me, technically unsupported! Therefore, I won't: if you want to run Giocoso on Windows 11, I'll give you instructions which have worked for me, but I cannot vouch for them in the long-run and I won't offer support for it. You're on your own, basically! Of course, if you are a well-off classical music enthusiast who loves using Windows and wants to donate Windows 11-supported hardware on which I can continue to develop Giocoso for Windows 11 in a properly supported manner, do please get in touch!

Those preliminaries out of the way: whilst Giocoso itself merely sips PC hardware resources, the Windows Subsystem for Linux version 2 (WSL2) that makes it possible to run Giocoso at all is a bit of a resource hog. It works, fundamentally, by co-hosting a virtual Linux PC alongside and simultaneously with the running Windows one. That sort of virtualisation immediately demands a 64-bit operating system and reasonable quantities of memory and CPU grunt -though we are not in ludicrously-overspecc'd monster gaming PC territory! I mentioned my 2012-vintage HP Folio13 onto which I've managed to crow-bar a working version of Windows 11, despite its ancient and unsupported hardware: it manages on 8GB RAM, a 500GB solid state hard disk and a 2nd generation Intel i5, 2-core CPU running at a sedate 1.6GHz. That seems at least adequate.

Before you can even think about running Giocoso on Windows 11 then, you have to first install the Windows Subsystem for Linux itself. Fortunately, Microsoft has made this a walk in the park these days! Just open a command prompt window with Administrator privileges (so, click Start, search for 'command', then right-click the Command Prompt item and select Run as administrator): This triggers quite a lot of activity, including downloading a complete copy of Ubuntu: Note in particular the mention of 'GUI App Support has been installed': it's this message which tells you that you're actually installing WSL2g, where the 'g' indicates baked-in support for graphical and audio Linux apps to run in a Windows environment.

Once the Ubuntu download is complete, you'll see a message that reads, "The requested operation is successful. Changes will not be effective until the system is rebooted." So, reboot your PC when you're ready.

When you log in after the reboot, "things" start happening automatically! To begin with, you'll find a command-prompt-lookalike window appears, though it's got an Ubuntu roundell as its logo in the title bar and task bar: 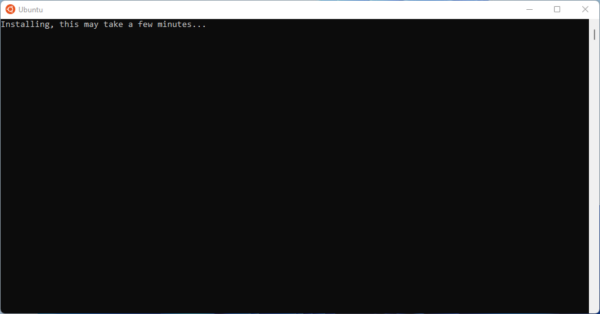 This installation process takes a few minutes and ends with you being prompted to create a new UNIX account (note to Microsoft: Linux isn't actually UNIX, so there's a terminological inexactitude at this point, but whatever...):

The account you create at this point doesn't have to match or be the same as your Windows' username/password combo... but I usually make them the same anyway, for ease of remembering things! Once the password has been accepted, you will find yourself staring at a full-blown Linux command prompt, where you can type all sorts of Linux-y things:

...by which you will swiftly learn that though this is 'proper' Ubuntu, it's using a special 'Microsoft WSL2' kernel. It's a technical detail which needn't detain us now, but it's interesting.

Once you've installed WSL2, you need to update it. At the Ubuntu command prompt, therefore, type:

A lot of software download will then take place, followed by a long process of updating hundreds of packages. Give it time and let it complete.

Once it does, I would also take this opportunity to issue this command:

...which will appear to pause for quite a few seconds before displaying this sort of thing: I'd do one other thing at this point, too:

...which downloads a small FLAC file we can test with later on.

Now, you should reboot your Ubuntu 'virtual environment' so that the software updates we applied earlier actually take full effect... but you can't reboot WSL2 by typing 'reboot' at the Ubuntu command prompt! You'll get an error message about 'System has not been booted with systemd...' if you try! Instead, to reboot a WSL2 virtual environment, you open a Windows command prompt window (administrator rights are not required) and type:

To then simulate powering on your Ubuntu PC once more, you simply click Start -> Ubuntu, and that will re-open the Ubuntu command prompt window afresh.

At your freshly-rebooted Ubuntu command prompt, type this command:

That quickly fetches a tiny (3KB) text file from this website's servers. You then run it as follows:

That will trigger a further software download and a prompt for your password to grant sudo privileges:

And that's really all that's required to install Giocoso version 2! Getting it to run successfully is a separate story entirely, however! We come to that next...

5.0 Running Giocoso for the first time

To run Giocoso for the first time, just type the command:

This will trigger the appearance of a rather fierce-looking wall of red error message text:

On its first run, Giocoso does a software inventory of whatever Linux environment you're running in and has concluded that your newly-minted Ubuntu environment is missing a few packages that it will need. The command needed to install the missing dependencies is written in blue, but is broken over two or more lines. For it to work, it actually needs to be submitted on a single line. To achieve that, you could copy-and-paste the two parts of the command separately; or just type the whole thing out as a single-line command. However you choose to do it, issue that installation instruction as a single-line command:

The command will fail, claiming that it has no idea what 'fc-list' is. This is a known 'feature' of installing Giocoso on Ubuntu-on-Windows: the fc-list package is actually required, but it's not available to Ubuntu-on-Windows under that package name, so you can simply edit that last package name off the installation command and try again:

As you can see, without that one package name in the command, it all works fine. You'll be prompted to continue (just press [Enter] to confirm) and then another bunch of software downloads and installs will take place. Once that's completed, launch Giocoso once more (again, just type giocoso): This is progress! The first time Giocoso runs with all software prerequisites installed, it will notice that there is no persistent configuration file present and will therefore propose to download a default one from this site's servers. Press a key to make that download happen (it takes mere seconds) and you'll next see this: Another wall of red error message text! This one isn't really an error, though: it's simply saying that when you run the bare command giocoso, the program assumes you want to source information about what music exists from a database (called 'music' by default)... and, of course, no such database yet exists, because you haven't created one yet. The trick, therefore, is to tell Giocoso to run without a database -to just play whatever music files happen to be in the folder we're running the program in, in fact.

So, now issue this command:

...to tell Giocoso to run without a database, and you'll see this happen: You obviously can't tell from a static screenshot whether I can actually hear music playing at this point, of course... but I can! The test music file I got you to download earlier is 'sounding' perfectly fine through my laptop's speakers (although it took a couple of runs before it worked, presumably because my laptop is old, slow and actually isn't meant to be running Windows 11 at all! After the fifth attempt, it all just sprang into life and has stayed that way ever since).

From this point, therefore, everything is 'normal Giocoso'. The hard part of running Giocoso on Windows is getting graphics and audio running inside an Ubuntu environment to appear and sound on the Windows desktop -but WSL2 takes care of all of that for us.

Once you've got Giocoso playing the test file adequately, it's time to point it at your real music collection. If that's stored on your Windows hard drive, you'll be able to access it from within the Ubuntu environment at the /mnt/c folder (replace 'c' with 'd', 'e' or whatever other drive letter you use!).

If (like me) your music files are actually stored on a remote server (not that remote in my case: in the loft!), then you'll need to be able to tell Ubuntu how to access them directly. In my case, I use the NFS networking protocol (though you might also do it via SAMBA), so I would do the following:

...which then allows me to do: ...and you can tell from the 'Now in:' bit of text in Giocoso's header that I'm now playing music from my music server, directly on Windows 11, via Ubuntu!

Once you can play music directly from your network sources, it's probably time to get Giocoso to scan your network sources for all your music and to populate its database with details of what exists and where it can be found. The command to do that in my case would be:

...a search for all your music files, followed by:

...a visit to each music file in turn, to assess the file's characteristics (composer, composition name, duration, performers, and so on). Once that has completed (which can take a while!), you'll see this sort of summary at the end: Once you know that Giocoso now knows where all your music can be found, you can simply launch Giocoso with the command:

...and get randomised playback of your music: I have no idea why Giocoso decided to play some Ignace Joseph Pleyel at this point: I certainly didn't request it, but Giocoso simply picked something at random to play and this happened to be what it picked! That's the whole point of Giocoso, of course: continual surprise at what gets played!

If you want to start instructing Giocoso what it should next play... well, that's where reading the rest of the documentation comes in handy 🙂 In particular, you need to read up on all the selection and filtering runtime parameters you can specify as you launch Giocoso.

For now, however, we're done: Giocoso is running on Windows 11 (sort-of!) and its audio and graphical output are handled entirely automatically by the magic that is the Windows Subsystem for Linux.

Summing up all of the above, then: