This is the last in a series of guides describing how I would suggest you go about the business of ripping and tagging different CDs of varying configurations. Previously, I’ve discussed ripping various sorts of single disk CDs and two-or-more CD sets. In this final article, I thought I’d specifically address how I would go about ripping this: This is a boxed set of all John Eliot Gardiner’s recordings of the nine Beethoven symphonies. Given that it contains five CDs and Beethoven wrote nine symphonies, we can use this as an exemplar for how you’d go about ripping and tagging any multi-work, multi-CD set of disks.

The specific arrangement of works-and-CDs in this boxed set is as follows:

So, although this is presented as a boxed set of a lot of music, it’s really just four cases of 2-works-per-CD (which we already covered in a previous article) and one case of 1-work-per-CD (which was covered in the very first article of this series).

Accordingly, since we’ve covered these exact scenarios in the past, I’m not actually going to go into a lot of detail in this article! The main point here is to realise that, just as Axiom 1 says the physical CD is irrelevant, so you must not get bamboozled into thinking that the boxed set is anything particularly special. It’s just a marketing droid’s scheme to sell you five CDs in one hit: more money for him and his company, probably less cumulative outlay for you than if you’d bought five separate CDs!

I’d also point out in this regard: Symphony No. 2 in this collection was recorded in 1991 in Blackheath, London; whereas symphonies No. 1 and No. 3 were recorded in the Snape Maltings concert hall in 1993; and Symphony No. 5 had to wait until 1994 and a recording in Barcelona! There is nothing to tie these recordings together, in other words, than the fact that John Eliot Gardiner was the conductor at all times. The recording venues were different; the recording engineers were different. Even the orchestra personnel changed, so that Elizabeth Wilcock was leader of the orchestra in Symphony No. 1, but Peter Hanson filled that role in Symphony No. 4. If you regard this agglomeration of recordings as an aggregated whole, deserving of treatment as a ‘cycle’ or a work in its own right, you’re doing it wrong!

Putting it simply: we have 5 CDs which need to be ripped in exactly the way we’ve ripped similar 1- and 2-work CDs before. There’s nothing special about the fact they were sold to you as a ‘boxed set’!

With the fact that we’ve got 9 separate ‘works’ that happen to share 5 CDs in mind, let’s see how I’d go about doing the rip. Well, the main thing is to take it one CD at a time, since no single symphony splits across 2 CDs. I’d therefore begin by inserting CD1 into my laptop’s optical drive, launching EAC, clicking the ‘CMP’ button and ripping the whole lot to a single directory on disk:

As usual, I’ve not used EAC to provide any meaningful metadata: you accordingly end up with a set of eight undifferentiated tracks, sequentially numbered, but with no other distinguishing characteristics. One thing I’ll mention about that screenshot: I’ve tagged everything with the artwork which represents the boxed set (so it reads ‘Beethoven 9 Symphonies’). That’s fine: it’s a visual cue to remind you that you own a boxed set of these works, not individual recordings. But I personally would probably want to tag each symphony with the artwork that was specific to it when it was first released, as a separate recording, not part of a boxed collection. For example, Prestoclassical tells me that the artwork for Symphonies No. 1 and 2 when they were individually released was: 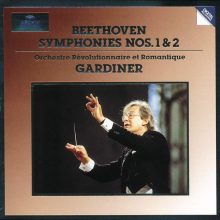 …and I actually prefer that colour and photo of Sir John… so I might choose to obtain that artwork and apply it instead. It would still apply to all eight tracks on this particular CD, of course. To take one other example: my complete works of Benjamin Britten came with this artwork: 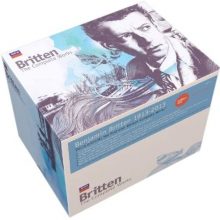 I would have been certifiably mad to apply that artwork to every single work I ripped from that collection -since, in that case, every single Britten work I catalogued would have looked identical to every other work of his! I would not have been able to tell one from another simply by visual inspection, in other words -and that’s a sub-optimal catalogue!

Anyway: the point is, you are free to choose meaningful album artwork. Don’t just stick with what’s supplied with your particular recording, if that would mislead or provide less information when you’re hunting through your library for something to play.

Back to our Beethoven: the album-specific information is applied next: Finally, the track titles can be applied: The quickest way, as ever, to do this is simply to do an in-place edit of the title column in the main part of the display. Press [Enter] after you’ve typed in each track’s tempo description (lifted straight from the CD booklet!) and you’ll move automatically on to the title column of the next track. Eight bits of typing later and the entire CD is marked up.

Don’t forget to renumber your tracks, too: Select the second set of four tracks and press Ctrl+K: that will invoke the track auto-renumbering tool, and you can then tell it to renumber the tracks starting at 01.

All that remains to do is to file the freshly-tagged audio tracks away in a suitable COMPOSER -> GENRE -> WORK physical storage hierarchy… and we’ve seen how to do that plenty of times in this series! Just click the Convert -> Tag – Filename menu options and fill in the format string as follows:

Doing this renames and moves all the music files into appropriate directories and sub-directories, as you can see here:

You can see from that screenshot that we now have a Ludwig van Beethoven -> Orchestral storage hierarchy going on and within the Orchestral sub-directory, our first two symphonies have been safely housed. The filenames for the first of those symphonies are also shown in that screenshot -and you can see that the TITLE tags have correctly been used as the basis for the file names.

So that’s Symphonies 1 and 2 from CD1 correctly tagged, re-numbered, split up and filed away as individual compositions: you just need to repeat that process for the other disks in the series. The only real difference when you come to process any of the CDs is with CD 5: because it’s all Symphony No. 9 on that disk, there’s no need to re-number a selection of the tracks re-starting at 1. There’s also an additional need to tweak the performer details in the COMMENTS tag a little: Remember: Symphony No. 9 is a choral symphony, so it (alone) requires the addition of the choir details to the comments. But really, apart from those relatively minor details, tagging up a boxed set of Beethoven symphonies (or any other boxed set of anything, come to that) is really not very different from any other tagging exercise: treat each ‘work’ or composition as a separate entity, turning it into its own ‘virtual album’, applying common, album-specific and track-specific tags as required, and using your tagger’s file renaming capabilities to make sure that the tag data is turned into physical form, in terms of a proper storage hierarchy on disk.

To finish things off, just make sure everything looks fine in your music player/manager: …which in this case, at least, I think it does!

Summing this up, then: a boxed set is really just a marketing package of individual CDs. Some of those CDs will contain 1 composition; some will contain more than 1 composition; some might only contain a portion of a composition. Either way, you treat each composition as being ‘king’ and handle the CDs accordingly. In this particular case, 4 CDs just got ripped in the same manner as ‘1 CD containing 2 works’; and 1 CD got ripped as ‘1 CD containing 1 work’ -both scenarios we’ve met before.

The objection to this approach, I think, is probably that you lose the sense of the entire set of symphonies belonging to one boxed set (which might be an important thing some people want to remember and be reminded of, though personally I don’t). Using a piece of album art that is common to the complete set can help here; making sure your “distinguishing artist” is clearly distinguishable in the ALBUM tag is another thing that can help.

Fundamentally, it is true however that when you have multiple boxed sets, if you tag in the way I have just shown, you will end up with them being ‘dispersed’: That is, all my Beethoven Symphony No. 4s get listed together before my Symphony No. 5s and my Symphony No. 6s, and so on: the net result is that the component parts of Gardiner’s ‘cycle’ are no longer ‘adjacent’ to each other. His recordings now don’t appear as a contiguous listing, because the distinguishing artist name is at the end of the album name tag. For me, this isn’t an issue: as I tried to explain at the start of this article, Gardiner recorded these symphonies over a period of about three years, in different places and with different players making up the orchestra. There’s nothing to really link them together in such an intimate way, to my mind, as to warrant listing them together as if they were part of a whole. It’s the individual symphonies that matter to me, so I prefer to see them organised appropriately, rather than their conductors. So the ‘dispersed’ listing you see above, to my mind, merely reflects a more important reality than caring about who’s conducting each of them.

Remember, too, that your media player should be competent enough to have a decent search engine. If I, with my album names as shown above, nevertheless wanted to see all of Gardiner’s recordings as a single, contiguous entity, I can do so simply by searching for recordings made by Gardiner, causing all my non-Gardiner recordings to be filtered out: A lot of the bad tagging practices I see being advocated by well-meaning people from time to time mostly arise from the fact that they appear to have forgotten that a good digital media player will be able to filter and search or can group and display things by non-default tag arrangements. Using those tools and functionalities, I therefore can achieve a contiguous listing, despite it not being my player’s default way of listing things. I don’t need to change my tagging habits to achieve the desired outcome, basically.

But if you really, really wanted your Gardiner cycle symphonies all listed together by default, followed by all your Järvi cycle symphonies and then your Karajan cycle symphonies, you could achieve that just by putting your distinguishing artist at the front of your ALBUM tag. Personally, I would hate to see “(Gardiner) Symphony No. 1”, “(Gardiner) Symphony No. 2” and so on in my own listings, because to my mind that appears to want to make the conductor more important than the work he’s conducting. But if that grouping is what’s important to you, and you don’t want to have to exploit your player’s less-well-advertised features to achieve it, or your media player doesn’t have such capabilities in the first place… well, it’s easily do-able simply by adjusting the word-order rules of the ALBUM tag very slightly, without changing the fundamental principles of the overall tagging game.