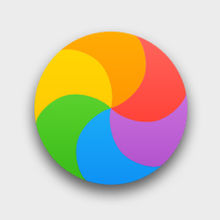 I still maintain Windows virtual machines -and, indeed, the Other Half's PC is resolutely Windows 10 to this day, since there appears to be a general reluctance to ditch the likes of Adobe Photoshop for photograph management from that direction!

So, Linux (and Unix generally) and Windows have been my daily bread and butter for a couple of decades at least. Moreover, throughout those same decades and with a degree of consistency that has, frankly, surprised me, I have avoided and disparaged anything to do with Apple. I won't have their kit in the house; I have zero experience of using any Apple hardware of any sort, and nothing has ever persuaded me to entertain the notion. The concept of spending excessive amounts of money to buy hardware that can be bought for far less money elsewhere, all for the pleasure of being imprisoned inside a proprietary walled garden, has been something I could neither comprehend nor endorse.

So this screenshot might surprise anyone that has been the recipient of one of my Apple diatribes in the past: That is Giocoso, the randomising FLAC player, running on MacOS "Big Sur" as installed into a VirtualBox virtual machine running on one of my physical, standard Linux servers. It's not running particularly well, and there are clearly errors that need to be sorted out (to do with the fact that Linux uses X server to place and draw program windows... and MacOS doesn't!), but it is actually working and playing music, which -with only a few lines of code having been changed so far- is pretty impressive (to me at least!!)

Even more amazing perhaps is this result of last evening's trip to the pub (I always think alcohol makes spending money, especially on Apple-y things, much easier!):

That's me buying an actual 2012 i5 Mac Mini for a little less than £100, which seemed reasonable after the fourth beer. Having proved that Giocoso could work in a slow-as-molasses virtual implementation of MacOS, I thought it would be OK to shell out not too much cash on buying a physical piece of Apple hardware. As you can see, the hardware will be with me by next Wednesday, 20th April. If all goes well -and that's a big "if", since I've no experience for developing or scripting for MacOS at all- I may have a Mac-compatible version of all my audio-related software by May or June. I wouldn't exactly hold your breath, though! Before that, you can expect multiple and frequent new releases of Giocoso containing new 'environment-agnostic' code that works better in a mixed Linux/MacOS environment: when it's finally ready to run on MacOS properly, I'll bump the version up to 2.0 and make a suitable song-and-dance about it! Remember, though: no breath-holding in the interim 🙂