Giocoso is the all-new gapless, trackless, optionally-randomising, optionally-scrobbling command-line FLAC player for Linux. It replaces and improves on the functionality of the earlier Absolutely Baching Music Player. You would not be entirely mistaken in thinking Giocoso is really AMP version 2.0. There are a couple of key differences, though, as follows:

Apart from those specifics, the Giocoso code has been completely re-factored and tidied up from its AMP origins, making it more reliable and somewhat easier to maintain. Other than that, however: anyone that has ever used AMP will feel completely at home switching to Giocoso. I should mention, too, that when making the transition from AMP to Giocoso, AMP's play history can be pulled across into Giocoso, so none of your play history is lost in the move.

Giocoso's release means that AMP as a product is now discontinued. You can still download it and install it, if you insist, from the usual places. But the script is now effectively 'abandonware' and will receive no further updates from me from July 15th 2021 on.

You are accordingly strongly recommended to download and install Giocoso instead and to use that in the future.

Installation of Giocoso is achieved most simply by issuing the following three commands:

The installation process requires access to the Internet and will prompt you for sudo privileges in order to be able to copy files to the /usr/bin folder.

The user manual for Giocoso, which covers (I hope) all aspects of the program's installation, usage and reporting capabilities is available as a PDF download here. (7MB downloads).

If you prefer reading your manuals in an E-reader of some kind, the same documentation is available as an 40MB download in Epub format here.

After you have installed Giocoso, it is suggested you run it once with the bare command:

Do that in a new terminal session where the terminal window has been configured to be at least 102 columns wide and 26 lines high, otherwise the display will be scrambled to some extent.

Running the plain 'giocoso' command for the first time might prompt you to install other software packages, and you should follow any software installation instructions provided. Once they've been installed, try running Giocoso with the bare command once more, having first cd'd to a folder containing some FLAC files. Once they start playing successfully, you know you can run Giocoso in all its rich functionality!

Having got Giocoso's 'Direct Play Mode' working, you should next create a database and point it at the physical folders where your music collection resides. The command would look something like this:

That will create a database called "main_collection" and then scan the /music/classical folder for any FLAC files lurking within that folder hierarchy. You obviously substitute in a database name of your own choosing and specify a location for the musicdir parameter which correctly points to the root folder of your own digital music collection. The results of the scan are stored within the database. Giocoso now knows where your music files can be found. The initial scan may take quite a while to complete, as Giocoso has to compute the play-length of each composition found.

At some point after database creation, you then make Giocoso work in Random Play Mode by issuing the command:

There is a lot more functionality available in Giocoso than that just described, but that at least should get music playing for you easily enough. If it doesn't, or if you want to start specifying particular audio hardware, factors to consider before making a random selection of music, or you want to start producing reports about what you've played, consult the extensive User Manual for details. In particular, see Section 9.7 for instructions on how to bring an AMP play history across into your new Giocoso database. 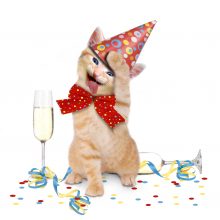 As a classical music aficionado, you'll already know that giocoso is the tempo indication that means 'lively, humorous, joyful' or, particularly, 'playful'. Being playful with your music colleciton is what listening to classical music should be all about: even playing a requiem should be a source of joy!

When it came to finding a 'mascot' or icon that could represent all that Giocoso stands for in relation to playing classical music, I couldn't help but think of 'partying cats': nothing seems more playful than a partying moggie to me. You will thus see joyful, playful cats in assorted poses all over Giocoso's user manual and anything I write about the product in these pages going forward. The two partying feline exemplars who have greeted you on this particular page are just two of many (so if you're a dog-person, I apologise in advance: allergy or aversion to cats is no excuse to avoid Giocoso!)