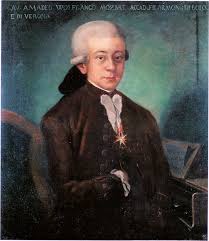 Today would have been Mozart's 264th birthday... and, quite by chance, it happens also to be the day that I've finally finished the first draft of the new Dizwell catalogue of his works.

The last few vocal works have now been excerpted and incipits found for each of them, so that makes 674 incipits prepared, uploaded and applied to the database, along with 635 40-second audio excerpts for most items. (The difference between the two numbers is that there are a handful of works that are now known to be 'not by Mozart'. For those, I've applied a 'blank incipit', but not bothered with an audio excerpt: simple maths tells you that there are 39 such works).

As ever with these things, I sort of stumble into a project that ends up hugely bigger than I ever intended it to be when I started! I had thought to simply re-name my Mozart audio collection and be done in a week at most, but I instead got into the business of upgrading large parts of my collection, so that my versions of his symphonies (for example) were recorded in the 21st century, not back in the 1960s. The need to prepare audio extracts for every Mozart composition also meant, practically, that I had to go out and buy all those pieces which I was cataloguing but which I had previously not owned. That takes time (and money!), but it does mean I can say that if Mozart wrote it, I've got a recording of it (with the sole exception of his Symphony No. 56 -for which no commercial recordings apparently exist as at the time of writing, for some bizarre reason or other: record companies please note, I'd like to be complete with no exceptions!!)

The catalogue now goes into a bit of a lock-down mode for a few days. I've spent slightly over four weeks listening to nothing but Mozart ...and doing very little but catalogue his works, so I'm frankly a bit fed up with anything to do with the late eighteenth century right now! It is, I think, time to leave the house and do some shopping or something...

Once I can face the draft catalogue once more, there is then the matter of turning into a finished product by tidying-up a number of errors that I know it contains. For example, just today, I found an item I'd classified as 'vocal', because it's title was "fugue for three voices". But that's just me being a clutz, for a three-voiced fugue is just what you call a fugue that has three independent parts, whether those parts are for human voices, violins, glass harmonicas or what have you! That particular piece turns out to have been quite clearly written for a string trio, so I'm afraid it properly belongs in the chamber category, not the vocal one. Now... moving items between categories is one thing; but re-numbering everything in the two affected categories to accommodate the departing and newly-arriving items is something else entirely! It's a non-trivial process, basically (which is why I need a short break before attempting it!). Fortunately, there are only a dozen or so instances of this sort of thing (that I know about!!), so I believe the task to be a reasonably contained one: I'm still aiming to have a completed and corrected version of the catalogue by the end of February.

In the meantime, I've found preparing the catalogue a very educational process: Mozart's music has always been a vast, amorphous body of work that was so intimidating in its scope that I have rarely known how to tackle it. I've therefore generally avoided it, apart from the couple of operas and concerti which are all-too-well-known. Now, however, because the new catalogue has broken the corpus down into component categories, each of which contains a manageable number of works, his entire output is much more 'graspable' and therefore approachable. I've begun to like and admire many works with which I was not previously familiar, in other words, simply because they were previously buried under an undifferentiated mass of music. It's been a bit of a slog, therefore... but, personally, I've found it a very worthwhile exercise.

But now I need to go away and do something... anything!... else. See you at the end of February, then 🙂