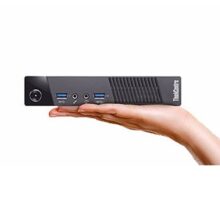 It's a shame (not least, because it wasn't cheap!), but I can't be having my daily driver desktop doing random things at random times.

So, I went hunting on Ebay for something equally small, equally 'lightweight', but a hell of a lot cheaper... and thus managed to acquire the Lenovo ThinkCenre M92P Tiny, which you can see illustrated at the start of this post, for a very modest £65. Yes, it's running 'only' a third generation Intel i5, which dates it to around 2014, making it pretty ancient. But that was never a terrible processor and, I think, remains more than competitive today. Sure, it can't officially run Windows 11, because it's hardware is not 8th generation or newer... but running Windows hasn't been something I'd willingly do since about 2012, so that's no great loss. And besides: my computing needs these days are fairly modest, and if I need heft and grunt, I can simply ssh to some of the beefier servers in my loft and have them run whatever task that might be! On the desktop, tiny and quiet will usually do just fine.

Of course, I have had to embark on moving everything across from the Minisforum -including the all-important Giocoso database which tells me what music I've been listening to for the last year or so... and provides much of the content for this website in the process! Fortunately, that turned out to be a relatively painless proces: it involves merely copying the contents of the $HOME/.local/share/giocoso folder to the new PC and then copying across a lot of crontab entries from the Minisforum so that the Giocoso data gets automatically copied to the web server. I think if you glance at my music listening history, you'd be hard-pressed to tell when the transition from one PC to the other took place!

For some reason, the Tiny's networking (which I hadn't realised is stuck at 100Mbps anyway) kept dropping out on me: a simple 'ping' of the server hosting my music would work fine for ten minutes at a time and then simply lock-up for another 3 or 4 minutes, before resuming as if nothing had happened. It made for a fairly choppy music listening experience, as you might imagine! I changed cables, tried switching to a wireless dongle for a bit, and fiddled for quite a time one way or another.. but in the end, I bought a cheap £10 USB3-to-Ethernet dongle from Amazon and that has made all my networking woes go away.

For anyone wanting to transition to digital music away from analogue: this sort of kit is really all you need, at least on the computer side of things. Capable, old, cheap, and just as good as any 'modern' PC for the task at hand. I should have listened to my own advice, really: there was no need to spend nearly £500 when $70 would do!