Thanks to another recent video by David Hurwitz, I was finally persuaded to bite the bullet and splash out on the complete Domenico Scarlatti keyboard sonatas as performed by Scott Ross (the album artwork of which appears off to the left). It's a 34-CD collection, available for purchase from Presto Classical at only around £2.50 a box, which seems reasonable value to me.

Curiously, this collection of works has previously been discussed by me in comments on this blog piece, where I was asked by 'DACO' how I would go about tagging the multiple Chopin Nocturnes or the even more multitudinous Scarlatti keyboard sonatas. I had to answer DACO in that exchange in the abstract, since I didn't at that point actually own the Scarlatti. The general principle I advanced, however, was: group lots of little pieces together in whatever way makes them accessible and attractive to play. Thus, I could speak from experience: a CD of Britten arrangements of folksongs would be ripped and catalogued as a single collection of folksongs, rather than 21 short pieces of (usually) less than 3 minutes' duration. Similarly, I had only just completed a re-rip of the complete works of Percy Grainger, where because of the quantity of music involved, and its overall great similarity, I found it more expedient to essentially rip entire CDs as 'Grainger Compilations' than try to separate out each individual composition as its own 'album'.

Well, now I actually own the Scarlatti, I can tell you precisely how I have gone about ripping and cataloguing them... and the short answer is, "as half CDs".

By which I mean that the CDs come in bundles of separate sonatas as can be seen in this fairly typical example: Sometimes, you'll get 20+ sontatas on a disk, so that specific example is a bit low on the number-count, but it's good enough to illustrate the principle even so. Almost all the tracks on this particular disk would pass my '5 minute rule-of-thumb' test, whereby if something lasts less than 5 minutes, it almost always cannot be considered a separate album on its own. But these exceed that limit, so could be ripped as 13 separate 'albums', if I was mad enough. But the fact is that, at this stage in my Domenico Scarlatti listening journey, one keyboard sonata pretty much sounds like any other: it would be foolish to elevate bricks in a 'wall of sound' to separate status. So, the overwhelming impulse is to rip the lot as a single 'album'. Except that, whilst I love the harpsichord, I don't think I could listen to an hour of it, non-stop, without suffering from severe ear-fatigue!

Which leads me to the conclusion that I should split this physical CD into two, each half lasting around 30 minutes (which is ear-doable!), but each still managing to aggregate around half-dozen or more sonatas into a single 'album'. On other CDs of the set, I've split 10/10, or 10/9, or 11/10 and so on: in every case, roughly half the CD has been turned into an approximately half-hour harpsichord recital. The complete boxed set of 34 physical CDs thus ends up looking like this on my hard disk: 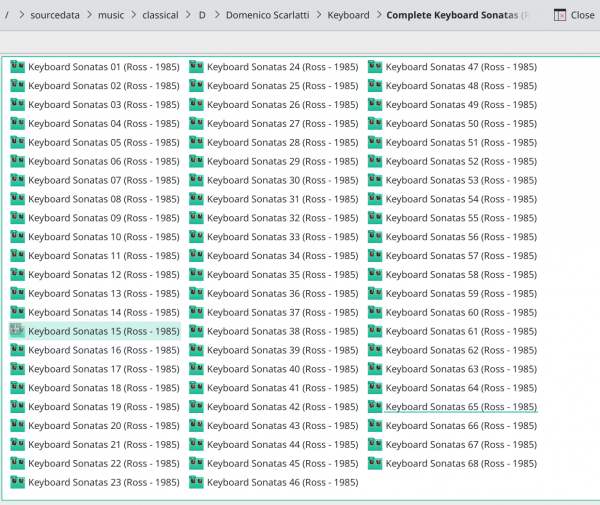 Within any one of those folders will be found a single 'album' that contains approximately half the contents of the original physical CD. I didn't use a lot of subtlety tagging all the tracks making up each 'album', either: As you can see, since they were supplied as one sonata per track, each track simply gets tagged as 'Sonata' followed by the relevant Kirkpatrick catalogue number. No 'Allegro' or 'Grave' or 'Minuetto' markings here: the individual works aren't 'substantial' enough to warrant that sort of cataloguing effort, it seemed to me.

The drawback to this cataloguing approach, however, is that 68 'albums' is still a lot of music to have to scroll through in a player like Strawberry, Clementine or Foobar2000: the problem of a 'wall of albums' might well still be an issue here. In the past, that consideration alone might have got me to aggregate on the basis of 2-CDs-to-an-album, whereby a 34-CD box set became a 17-album listing in my music player. Of course, that would mean each album would be a 2-hour harpsichord recital, which might test the patience of a saint! But you basically have to weigh scrolling/discoverability against listening durations and come up with something that seems like a plausible balance.

Fortunately, these days, I don't have to worry about having to scroll through a wall of 'albums' at all. AMP means that there is no 'wall of albums' to scroll through: AMP will merely pick Domenico Scarlatti to play by randomised magic and then proceed to play a half-hour of his keyboard sonatas at a stretch. The music is discoverable because it exists on my hard disk, not because I have to scroll my way through it, physically and visually, in a music library panel. So I can keep my ear happy, by keeping the length of things down to around a half-hour, and not worry that this creates too many 'albums' for a specific composer. Remember, too, that in AMP's randomisation process, each composer is as equally weighted for selection as any other: that Scarlatti now has 68 'albums' attributed to him makes him no more nor no less 'selectable' by the randomiser than Johann Sebastian Bach or Karol Kupiński are.

Anyway: I thought it was an interesting question when originally posed by DACO, back at the start of January. It's nice to now be able to give a final answer based on my own actual tagging practice, albeit some two months later. I hope it helps someone else decide 'what counts as an album' in the future!