I began this mini-series by reiterating the way I catalogue my music. Fundamentally, it's just organised in Composer/Genre/Composition order. Then, in the second episode, I explained how I used Emby Media Server to share my music around the house, to the car and to overseas hotel rooms... but that Emby didn't honour the cataloguing hierarchy I'd adopted, but instead simply displayed things in Composer/Composition order, missing out the Genre. This was a failing I could live with, though, since Emby isn't the main way I listen to music.

I was, however, able to conclude that last post with the delightful news that if you used Emby's Folder view of your music, then it displayed the music collection in precisely the same way as it was stored on hard disk, thus fully respecting the three-level Composer/Genre/Composition hierarchy after all.

So, we left the last episode on a bit of a high note, and Emby sounded like it was doing all that I could ask of it!

Let's back up a bit. When you first get Emby to scan your music collection, it produces results like these: You will immediately notice the presence of lots of 'anonymous people' icons that are basically indistinguishable from each other, though coloured in a random assortment of relatively primary colours! Not very attractive, and not a great way to find your composers. You can see Benjamin Britten is listed in that lot, but unless you read the text closely, he looks identical to the two composers on either side of him! Now, it's possible that if you leave Emby for long enough; and if have just the right server-side settings; then Emby will have a go at replacing some of those coloured circles with portraits of the relevant composers pulled from assorted online sources... but I wouldn't hold your breath, and I wouldn't want to bet my house on the results being pleasing or accurate! I can guarantee that the icon for Englebert Humperdinck, for example, will be something like this one: 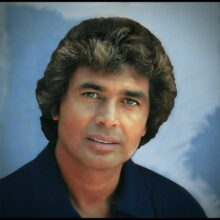 Welcome to the world of people who haven't a classical music clue!

Anyway, that's by way of introducing you to the fact that you will have to take your Emby collection in hand and manually tell it what pictures to display for each 'Artist' icon (i.e., each Composer's circle in the Artist view). It's not too difficult... but with 570+ composers to sort out, it can be a bit laborious! Confronted with this in my 'E' section, for example: ...I would hover over the Englebert Humperdinck icon and click the three dots button that appears when you do so: That brings up a context menu from which you can select the 'Edit Images' menu option. That takes you to this screen: ...where you can hit the trashcan icon to delete the wrong image. With that bad image deleted, the trashcan turns into a plus-sign, which you can then click: ...and now you can browse to the correct picture, or simply click-and-drag it into place using your file manager:

Click the green 'Upload' button and your new image is saved into Emby's database and (once you refresh your browser's main display of the Emby Artists view) will be used as that composer's 'avatar' thereafter: Now all you have to do is... repeat that for all 570+ composers in your music collection! It sounds tedious... because it is, but you end up with quite an attractive display of all your composers, making distinguishing one from the other relatively easy: I find it a lot easier to find Benjamin Britten on the third row, now that I have a visual clue to help me in addition to the text! And the good news is: you only have to go through this pain once. As soon as you tell Emby what picture to use for each composer, it will remember it forever thereafter.

But remember: this is all the work I did to get the Artists view correct -that view that I'd been using in Emby for years, despite that not then allowing Genre/Composition display after selecting a particular composer. You'll recall from the last blog post that I've now discovered that it makes much more sense to use the Folders view, which fully respects my Composer/Genre/Composition organisational hierarchy. So, no problems: just scroll to the top of the page in your browser and select 'Folders' from the menu of available views. And when you do that, you'll find this happens: Now, I've just zoomed into the 'T' section of my collection within a virtual machine for demonstration purposes... but you will immediately notice the presence of colourful squares rather than pictures of composers... but only for some composers, not all. Let's be clear, it's not a problem with me marking up the composers with the correct imagery in the Artists view. Here's the equivalent section of that: In the Artists view, all T-composers have proper artwork; in the Folders view, some do and some don't (and they've turned square rather than circular, too!)

I wonder whether we can tell why some of my T-composers in the Folders view seem to be missing their artwork?! Well, let's just check the Thomas Tallis one, shall we? That's appearing as a yellow square at the moment. Here's what that folder looks like on the hard disk:

So, the folder contains a piece of imagery in the form of a PNG picture called 'Thomas-Tallis.png'. Now let's compare that with, say, the folder for Thomas Arne which is correctly (and automatically) displaying artwork in the Folders view: Hmmm... so that contains a PNG file, too, this time called 'Thomas Arne.png'. So it can't be that Emby doesn't like using PNG files for its item 'emblems': it's using Arne's one just fine, but not using Tallis' one, after all. Both pieces of artwork are equally PNG files! But what else do you notice about the Thomas Tallis example? I'll give you a clue: compare the name of the PNG with the name of the folder it's sitting in.

Yup: Thomas-Tallis is not the same name as Thomas Tallis, but Thomas Arne is exactly the same as Thomas Arne: the presence of the hyphen in the PNG's name is enough to stop Emby using the PNG in the composer folder as the emblem or artwork for that composer. However, it's not just hyphens that trigger this behaviour. Let's have a quick look at some of the other folders that don't display composer artwork in that earlier screenshot of my Emby T-composer Folders view:

In both these cases, the artwork's filename doesn't match the name of the folder it's sitting in exactly. In the case of Thomas Weelkes, the PNG's first and last names are run-on into a single name; in the case of Toru Takemitsu, an underscore separates the two names. In both cases, folder name != artwork file name.

In fact, we can summarise the situation very simply: Emby's Folder view only auto-displays artwork for each composer if that composer's physical folder on disk contains artwork whose name (before the PNG or JPG extension) exactly matches the folder name. If they differ by a space, a hyphen, an underscore, a missed accent, anything at all... then Emby will display a colourful square as the folder icon, not a composer picture. And it does this even though you have previously gone to the trouble of getting every single composer's artwork correct in the Artist view!!

This is incredibly annoying. It means that you now have to again work through all 570+ composers in your collection and again make sure their artwork is correct -and this time, you need to do it at the file system itself. You've got to drop into every composer folder in turn and make sure that the artwork file there is named exactly as the folder name it's sitting in. After that, you can visit the Emby settings, go to the Advanced section, click on Scheduled Tasks and then run the 'Scan media library' job (or you could just wait for 12 hours or so, since it's scheduled to run automatically at that frequency by defauly, so it will happen all by itself if you wait long enough). Once that job runs, any changes you've made to file names at the file system level will be picked up and: ...now all your composer folders will be displaying their correct and appropriate composer artwork!

What a pain, though! In my case, because I've been using the Artist view for years, I had made sure that the composer artwork was correct in that view, over the space of years. That meant finding and downloading appropriate portraits or photos and then storing them in the correct folder -but because you have to manually apply them to the composer for them to display correctly in Emby's Artists view, the name of the files you store don't have to be particularly 'correct'. My Thomas Tallis artwork was called 'tallis.png' for example: no first name, all lower case. That was fine when it came to manually assigning that file to the artist in Artist view... but, unless I again wanted to manually assign every portrait to every composer one-by-one in Folders view, all over again, the file name now mattered.

In the end, I had to rename around 350+ of my 570ish pieces of composer artwork before the Emby Folder view looked as correct as the Artist view had always done. I can't help feeling that it ought not to have been like that! If you get the artwork correct for one view, I don't know why it can't be correct for the others, automatically. But, at least all my artwork is now correct, no matter which view I'm using!

So, in this Episode Three of living with Emby, I did manage to get the Folders view working well for me, after only a day or so's work at the file system, renaming JPGs and PNGs much more carefully than I had named them previously. The lesson I'd draw from this, personally: do the job right the first time! If I'd had correctly-named composer art from the get-go, switching to Folders view wouldn't have been a drama. Go, therefore, and do likewise yourselves!! 😉

It would be nice if I didn't have to write a fourth episode, wouldn't it?! Unfortunately, no such luck. Watch this space!!